SOCH Nepal has organized an interaction program between intellectuals on untouchability, Dalit rights, and religion. In a program organized in Kathmandu today, various intellectual personalities discussed the system of untouchability in religion. The program’s focal person was the former Advisor to the British Embassy in Nepal, Research Fellow of the University of Oxford, Dr. Mitra Pariyar.

Dr. Mitra Pariyar said Hinduism has not allowed Dalits to live as human beings. Religious provisions such as the refusal of a Brahmin to eat by showing dogs, pigs, and pandas have been found to be quite different in the 1949 Land Act. If the Dalit reads the Vedas, the tongue cutting is in Hinduism. The victims of untouchability did not convert to Nepal. In India, Arya Samaj, Ambedkar’s campaign, Buddha and Mahavir’s campaign had opened some paths for Dalit to become human. Nevertheless, the Dalits remained tied to the religion because of the communion with religion.  Although all religions are superstitious, at least there is no caste system in a religion other than Hindu, so the current Dalits need to renounce Hindu religion. Realizing this, Ambedkar had abandoned Hinduism along with about one lakh Dalits and adopted Buddhism.  To renounce Hindu religion would be to become an atheist. But Dalits have become atheists because atheists do not have a separate system of continuation of the sacrament. When people die, they get married and get married again. But now every sect has discriminated against Dalits.  It is said to be born again when the women are born. But the Dalits are confined and tied up in the fold. Animal behavior is treated. Just as the goat is worshiped before sacrificing, so is the practice of leading and worshiping the Damai in the auspicious act. But in reality, Dalits are the only part of the sacrificial animal’s vagina and tail.  What could be more humiliating than this? The basic tenet of Hinduism is the caste system. He concludes that Hinduism was created on the basis that Brahmins are pure and Shudras are impure. They also argue that Dalits are poor because they are poor.  If so, the economic status of Nepalese and Dalits who went to Britain is the same, yet there is the same discrimination against Dalits. After the death of a Dalit in 5 years, his body was not touched by the Gurung there.  If oppressed the Dalits due to the poor economic situation, is the marriage of the daughter and daughter of the rich goldsmith? Although poor, the bride does not want to join the wealthy goldsmith’s family. Dalits are still untouched as the fruits of pre-birth. But at least the church does not have that law because many Dalits have been attracted to the church. Such conversion is a personal and collective uprising for Dalits. Now the rules and regulations have now said that they should not be touched. But in the court, there is the same Brahmanical judge.  And once the victim, the Dalit again goes to the judge’s room and suffers. Instead of having this kind of repetitive pain, the Dalits seem to be moving towards rebellion. We know that the West is against the caste system, but Britain is equally embroiled in the caste system. When the British ruled India, they made full use of ethnic divisions.  Even now, Britain has recruited its Gorkha in a racist way. He does not choose Bahu and Dalits on the basis of ethnicity but recruits the army as it is easier to use the tribes in the cultural war. Therefore, Britain has a double standard in Nepal: economic assistance to Nepal calls for an end to the caste system, but Gorkha recruitment is done in a racist way. Even when the British returned from India, Bahun left the Chhetri army in India and took the tribal army to Britain.

Narendra Jung Peter: In India, Hool has killed a Dalit that he rode on a horse. Dr. D.D. In the book Jatha Ayod, Jha clearly mentions the atrocities committed by cows. For the Brahmins, the horse and the cow are being oppressed to show that Dalits are superior to human beings. Muslims also have racism. Pathans, mines, Ansari do not have inter-week intervals. In the book the Volga to Ganga Tak, Rahul Sanskaryan mentions Chandrasekhar Ravan.

He has carefully analyzed caste practices.

Sitaram Ghle Pariyar: In the west, there is still a layer called Bittlo. That is, the upper caste is like a different caste formed after marrying the lower caste. They are very different from the village society. Dr. Friend Pariyar said that Dalits need to revolt with weapons. But I don’t think so. Let’s look at the history of 2-year-old people’s war. Until the war broke out, untouchability seemed to have gone away.  But now the same people are divorcing. Therefore, war is not the solution. Weapons do not change. The present Dalit movement must bring about three levels of change: politics, law, and scientific thinking. Only then will the movement succeed.

Ganesh B. K.: 10 years of people’s war, but a change in the country brought about 90 days of the movement. Therefore, the movement is stronger than the weapon. At the same time, there is a difference between the Dalit Dalits and the Dalit movement seeks to slow it down. Yes, there is discrimination within the Dalit and that too is made by the state. The corrupt, Brahmanical state is the problem today. This law has been practiced since long ago.  The state used to impose slaves on its arms. Equally important is scientific consciousness. The caste system ends immediately if the state wants it. But don’t. From the time of Pushpalal, there was a movement calling for a change of Nepalese society. Ambedkar’s political movement on the caste system did not happen in Nepal. He even joined the movement against racial discrimination by dismissing the British proposal to make Ambedkar the head of Pakistan or Bengal. If there was such a rebellion, something would change. The Dalit movement is not just untouchability: it is a movement for economic, social and religious equality. Now the changed Dalit movement has to be reinterpreted. Our leaders say that the political movement of this country has gone from totalitarianism to capitalism.  Dalits remain a class. Dalits are yet to become people. When everyone becomes a human being, we become a shared culture. It is imperative for Dalits to stage a movement to boycott Hinduism. After abandoning this religion, let us adopt the science of changing society.  Marxism may have been a science, but the current leader has committed corruption against Marxism. The party founded on the theory of Marxism has more discrimination on Dalit than religion. Dr. Where is Tilak Pariyar administering the oath to Baburam Bhattarai. Baburam can only be seen wherever he is. Every revolution in Nepal was to strengthen Barnabas. Instead, Dalits did not renounce religion by Bahun. The Brahminist rulers destroyed the Dalits’ associations.

Ramdev Pandey: Dalits are protesting against the entry of a temple set up by the Bahu’is to discriminate Since the temple itself is the center of discrimination, I would have to say that I would not set foot there. It is fitting that Ambedkar abandoned Hinduism and converted to Buddhism. Atheism also requires culture. I am an atheist and love culture so much, but culture should not be superstitious and discriminatory. Now, it seems that Dalit campaigns are being run by NGOs and INGOs in particular.  Campaigns can improve and redefine religion. As far as the question of whether Dalits should abandon Hinduism and go to Christianity, this is like throwing a hammer on the floor. Hindu or Christian religions are the only ones bent on superstition. Buddhism is true according to philosophy, not religion.

Arjun Pariyar: The path shown by people like Ambedkar can be the path to Dalit liberation. If the situation of the division of labor is changed, then the status of Dalits can change. Planning war and rebellion is not going to create a situation. Carl Marx has said that war is not just the meaning of war, but also the way science and society change.  It may be time to make a difference in the subject and method of the movement. Let Dalits be able to argue about religion and culture. How to make Dalit a businessman? The key is how to make the inclusion movement stronger. Dalit is nobody but a living being. If they have labor and skill, they can say that private companies should invest in Dalits in order to get the maximum benefit from it.

Sanjay Khadka: Dalit movement is not only for Dalit, but it is also the movement of all. It is important to be more vigilant in this regard than those called non-Dalits. From the school level, the study should be conducted against untouchability. In order to end untouchability, it is necessary to work at the discretion of people. Therefore, arguing and discussing the discrimination of people above religion is essential.

Uttam Niraula: Racial untouchability is the most brutal and blasphemous discrimination in the world. India should not allow the world to debate this issue. It is common for Dalits to be murdered on a daily basis, but if anybody voices that there has been an atrocity on Dalits, then India is the most concerned. Because of this, the issue of divorce is becoming more common in the world. On the other hand, the UN has not even used the word dalit officially. A different UN commission is required to look into the issue of Dalits. The Dalit leader may have had to fight for two years to bring what was not brought up. Even though the Dalit movement was divided into the party, the Brahminists succeeded in practicing division and rule.  Now is the time to raise a global voice about racial discrimination. The untouchability is similar not only in Nepal and India but also in other countries like South America and Hindus who have migrated to other countries like USA, UK. Therefore, you have to explain to the nation that you are not clean from caste-based discrimination 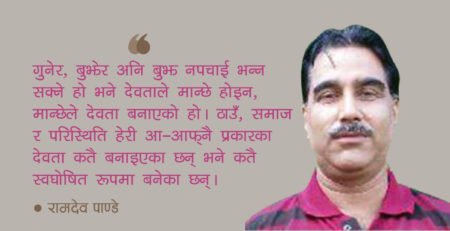 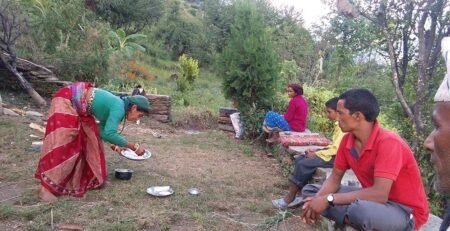 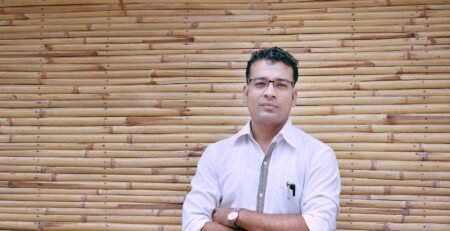 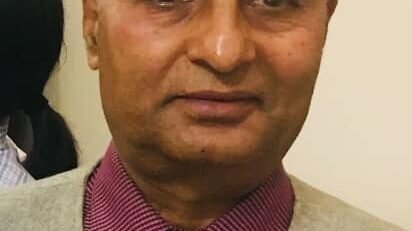 Nepalhas entered a very crucial phase of its history with the proclamation of a progressive constitution with a secular [...] Uttam Niraula What is witchcraft? Working in the Social sector for long time as a human right activist has caught me by surprise [...]